A Muslim author who visited mosques across Britain to investigate integration has revealed 'No Go Zones' for white people.

The report reveals parts of Blackburn are 'no-go areas' for white men, while ultra-orthodox parents in Bradford make children live under Taliban-like rules.

The author and political advisor Ed Husain, Professor at the Walsh School of Foreign Service in Georgetown University, has penned Among The Mosques: A Journey Across Muslim Britain in which he explores some of the UK's largest mosques and the Muslim communities worshiping there.

The Muslim writer, who in his youth, trained for Jihad by the same people as Omar Khyam, leader of the Bluewater bombers, grew up in a Bangladeshi family in Tower Hamlets, East London.

In the book Ed details how he researched his work by 'turning up unannounced' to the communal Friday prayers at the central mosque in cities across the country. 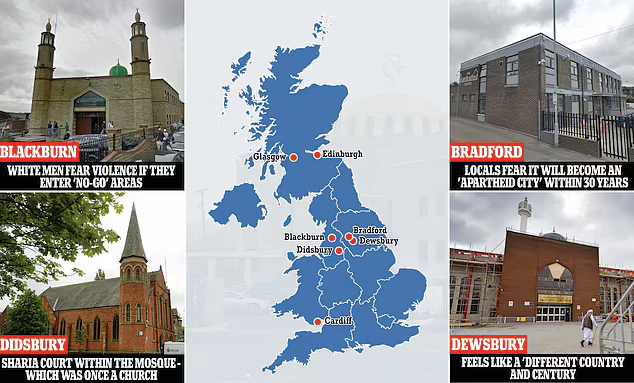 Husian, also chronicled conversations with taxi drivers, business owners, Imams and local white people about the mosques and the surrounding community, painting a worrying picture of divided communities - with white people in towns across the country admitting there are 'no-go areas' where they fear being physically attacked.

One man in Blackburn said 'Asian' teenagers repeatedly 'jumped' his 12-year-old son in broad daylight for 'being white'.

Areas like Bolton, Dewsbury and Blackburn are described 'a different universe', while he observes that in parts of the cities he has visited: 'A Muslim can spend months with no contact whatsoever with mainstream 'white' Britain'.

Elsewhere, parents in Bradford Muslim parents have banned children from taking part in drama, theatre and dance classes as well as drawing, in echoes of rules implemented by the Taliban in Afghanistan and ISIS in Syria.

They are 'physically in Britain but mentally living elsewhere,' said Husain.