Two more teachers have been suspended after a cartoon of the  Islamic 'prophet' Mohammed was shown to pupils at a school.

The latest suspensions mean three teachers are now being formally investigated over the matter.

None of them have been named for their own safety, following a barage of abuse, protests and death threats from the local Islamic community. 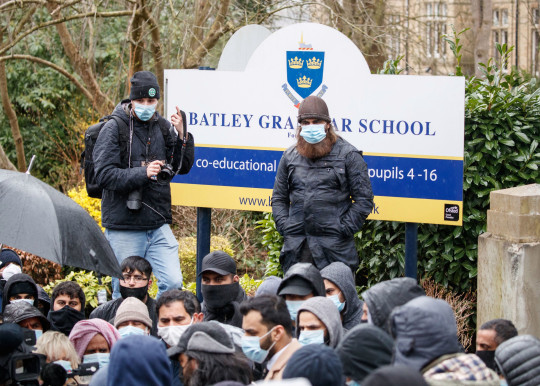 Dozens of Muslim parents furiously protested outside Batley Grammar School in West Yorkshire for two days last week after it was claimed a cartoon of Muhammad – previously published by French satirical magazine Charlie Hebdo – was shown in a religious studies class.

A school source said that the blasphemy lesson had been part of the curriculum, but the showing of the cartoon had not been authorised.

A Muslim pupil was offended by the lesson and their parents complained.

‘Two other teachers are also being investigated but the school has been trying to keep it secret because they don’t want attention being drawn to the fact that this went beyond the actions of one person,’ the source said. 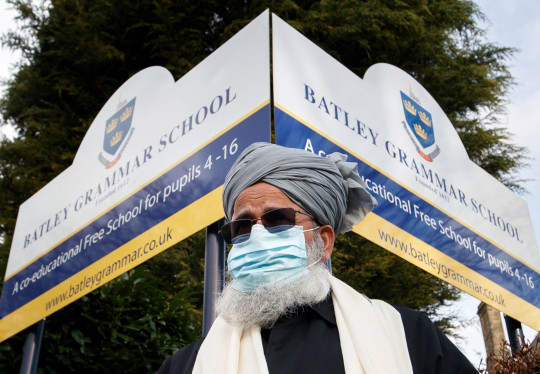 The school Head Master issued a grovelling apology following the complaints and protests by furious Muslims outside the school.

A statement from Batley Multi Academy Trust said: ‘We understand everyone will want clarity as soon as possible.’ ‘We’re grateful for the constructive engagement with all our stakeholders over the last few days with regard to Batley Grammar, one of the schools within our trust.

‘We believe the right way forward is for an independent investigation to review the context in which the materials (which caused offence) were used, and to make recommendations in relation to the religious studies curriculum so that the appropriate lessons can be learned, and action taken, where necessary.’

The RS teacher who was suspended for showing the picture to his class has been forced to flee his home and go into hiding with his partner and small children after threats have been made against their lives.