The journalist who fronted the BBC's controversial royal documentary has previously spent years tweeting hatred towards the Royal Family.

Amol Rajan - the BBC journalist who presented The Princes And The Press - had previously condemned the channel for its 'utterly relentless, spirit-crushing monarchist propaganda' and joked about 'throwing a brick' at Prince William and Kate.

He slammed 'sycophantic and shameless monarchist propaganda', said the Duke and Duchess of Cambridge's titles were 'absurd', and criticised Kate during her wedding for her 'false royal wave' which was 'desperately sad'. 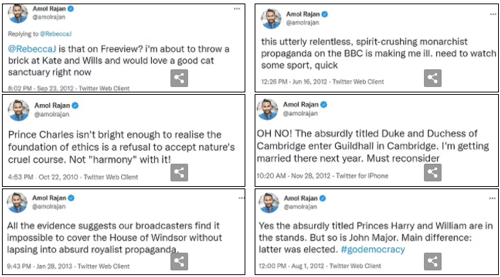 Rajan, 38, posted around 20 critical tweets about the royals over a period between March 2010 and January 2013 when he was working for The Independent newspaper, but before being appointed editor in June 2013.

The revelations will pile fresh pressure on the BBC over its handling of Rajan's two-part documentary, which drew unprecedented censure from Buckingham Palace, Clarence House and Kensington Palace and bias accusations.

Rajan apologised on Twitter for describing the public role of William and Kate as a 'total fraud' and calling Philip a 'racist buffoon' in articles written in 2012 for The Independent. 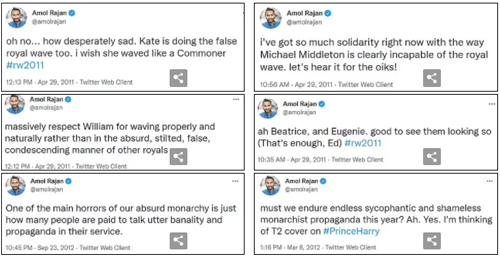 However, since doing so, a number of other tweets have been uncovered including one in which Rajan slaims he is 'about to throw a brick at Kate and Wills'

A BBC spokesman also told MailOnline: 'Once journalists join the BBC, they leave past views at the door. Amol is an experienced BBC journalist who reports on all of the topics he covers in an impartial way and in line with the BBC's editorial guidelines.'

Among the tweets was one posted on June 16, 2012 - the day of Trooping the Colour - when he said: 'This utterly relentless, spirit-crushing monarchist propaganda on the BBC is making me ill. Need to watch some sport, quick.'

Amol Rajan, who is now the BBC's media editor, is one of a significant number of presenters who earned over £150,000 per year at the publicly finded BBC.